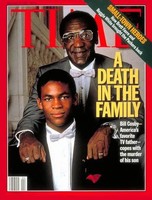 Ennis Cosby Is Recalled As Devoted to Teaching


Ennis William Cosby, a doctoral student at the Columbia University Teachers College, was fondly recalled yesterday by professors and friends as an inspiring individual who dreamed of creating a school for children with learning disabilities.

''He was just the kind of person you wanted to recruit as a teacher,'' Margaret Jo Shepherd, Mr. Cosby's academic adviser, said after learning that he had been shot to death in Los Angeles. ''He was smart, sophisticated, fun-loving and knew he wanted to work with children.''

Ms. Shepherd added: ''He would talk to us an awful lot about people who were disenfranchised because they did not have money. He wanted to give them opportunities. He was concerned about the effects that learning problems have on a child's self-esteem.''

Mr. Cosby had overcome dyslexia, graduating from Morehouse College in Atlanta in 1992, and Ms. Shepherd said ''he had a particular interest in kids who were dyslexic and who had difficulty in reading.''

College officials recalled that his father, Bill Cosby, who has a doctorate in education from the University of Massachusetts, and his wife, Camille, and their daughters, sat in the front row when Ennis Cosby graduated in May 1995, receiving his master's degree in special education at Teachers College.