By Michael A. Fletcher

When Murray Alexander Schmoke Jr. told his family that he was going to South Africa as a volunteer English teacher, relatives worried about his safety but did not try to stop him.

"I was real concerned," Mayor Kurt L. Schmoke said. "But I remembered my own experience at that age. When I told my parents I was going somewhere that they considered dangerous, I'd always say 'I'll be all right.' "

So it was for the mayor's 25-year-old half brother, who confidently left for South Africa in January. And while he was safe from that country's growing political violence, Mr. Schmoke fell victim to an automobile accident.

Mr. Schmoke died Monday when the minivan in which he was traveling blew a tire, veered out of control and rolled over, tossing him from a side door. He and two other travelers were killed in the accident. The wreck occurred along a stretch of highway between Pretoria and Pietersberg, the rural town where Mr. Schmoke taught English to 11th graders.

"I can't believe it, an automobile accident," said Murray Schmoke Sr., the father of the mayor and "Alex", as the younger Schmoke was known to friends and family members.

News of Alex Schmoke's death stunned the Schmokes, who knew him as an energetic young man who left a lasting impression on most people he encountered.

"My son had what I'd call charisma," said Elizabeth Schmoke, his mother. "Wherever he went, he usually left with people remembering him."

Alex Schmoke attended the Friends School, where he played soccer and lacrosse, before transferring to City College in ninth grade. He graduated from City in 1987 -- 20 years after his older brother, the mayor.

"We had a huge age difference -- 19 years, -- but we always stayed in close touch," the mayor said. "There were phone calls, letters, he borrowed money from me. We became really close when he decided to go to City College."

The mayor said that his younger brother used to be fond of wearing his old, leather-sleeved varsity jacket to high school. The mayor had been a storied football star during his days at City.

"He was very proud of Kurt," Murray Schmoke said. "They were very close. Whenever he had a problem, he'd go right up there to Kurt's house to talk to him."

After graduating from City, Alex Schmoke went to his father's alma mater, Morehouse College, a predominantly black school in Atlanta. To this day, Murray Schmoke counts his son's graduation from Morehouse as one of the proudest moments of his life.

"He fulfilled my desire to have a son graduate from Morehouse," Murray Schmoke said.

After graduating from college with a history degree in December 1991, Alex Schmoke returned to Baltimore, where he worked at T. Rowe Price for a year. Then he went to work in Washington for a group that raises money to bring black South African medical students to the United States.

That experience deepened his desire to work in South Africa. He applied to the Peace Corps but was turned down because he lacked the technical skills the group now looks for in its volunteers.

He later took a job at Friends School, where he had several responsibilities, including working in the after-school program. And while working at Friends, he was accepted into the volunteer teaching program run by Georgetown University that took him to South Africa.

After he was accepted, he learned that Georgetown was suspending the program this year -- largely because of the South African elections this month and the potential they brought for political violence.

But he and several other volunteers in his group went ahead anyway, shouldering the cost of plane tickets and immunization shots for an opportunity to teach English at Pax University, a Catholic mission school in rural South Africa.

"The students liked him. He had a presence with them," said Patrick T. McCabe, a former volunteer teacher at Pax, who met Alex Schmoke in South Africa. "He was a real role model. Being a black American, the students really looked up to him."

Funeral arrangements were incomplete yesterday. In lieu of flowers, the family asks that any donations be sent to the Baltimore Morehouse Alumni Scholarship Fund, 1518 McCulloh St., Baltimore, 21217. 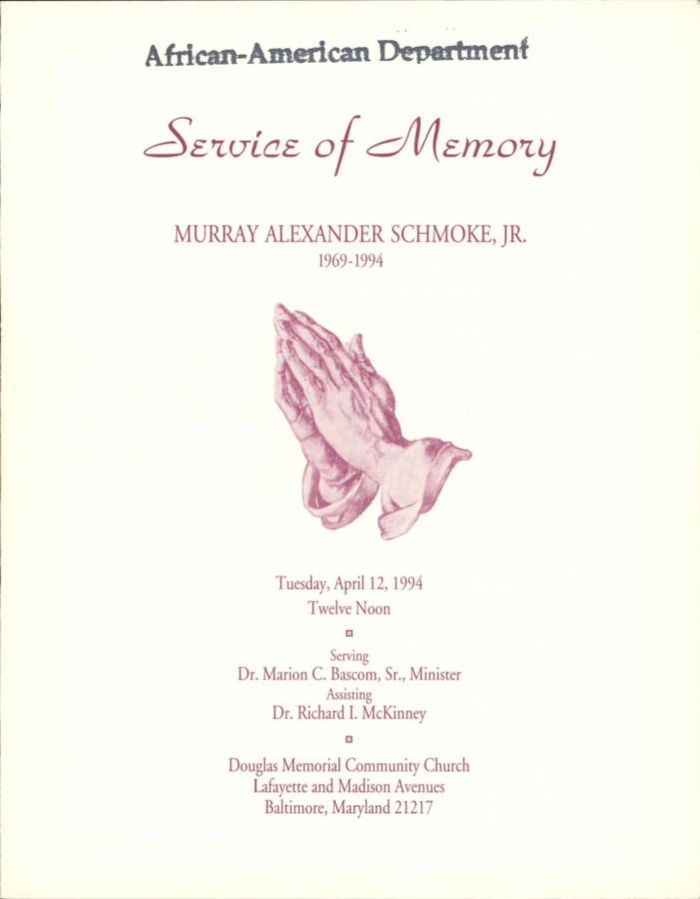