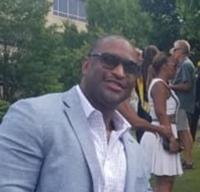 Derrick Alan Palmore was a devoted husband and loving father that we will cherish forever. Born on December 23, 1969, he was the oldest of three born to the loving arms of Roland and Erma “Jean” Palmore in Columbus Ohio. Little did he know, his parents already had his childhood and college planned before he arrived. They took the scripture Proverbs 22:6 “Train up a child in the way he should go, and when he is old, he will not depart from it” very seriously.

Derrick graduated from Saint Charles Preparatory High School. He finished his Bachelors degree in Arts from Morehouse College and Masters in Business Administration from Strayer University.

On November 7, 1998, Derrick married his loving wife, Shea. They had two beautiful children Derrick (22) and Danyelle (17). Derrick was a proud dad who always encouraged his children to strive for their goals and praised their accomplishments, the most recent being little Derrick’s bachelor’s in information systems from Kennesaw State University. Being equally attentive to both of his children, he was also focused on Danyelle’s next chapter. Derrick gave great thought about how to best protect and release his only “baby girl” as she transitions to college in the fall of 2022. His love and support did not stop with his own children but extended to his nephew and niece (Quinton & Hailey). He also took the time to be a mentor to many other children that crossed his path because he knew it was his duty to pay it forward. This principle of being a blessing to others was a strong and consistent character trait displayed by Derrick from a very young age as it was instilled in him by his parents.

As the dedicated father he was, he took great pride in pushing his children as well as those he mentored, to excellence. Although the kids would not describe all of their growing experiences as fun, Derrick cherished family time which often incorporated teaching moments. Derrick wanted them to know that life will not come easy, and you had to work hard for what you wanted. That was the code of conduct that he lived by every day.

Derrick began his career with the 100 Black Men of America as a project manager and, then pursued a long career in pharmaceutical sales where he earned top sales status for several years. After taking a break from the pharmaceutical industry, he co-owned a Liberty Tax franchise. He moved on to work with US Medical Supply as an Account Executive which was just his day job. As many of you know, Derrick was a workout fanatic. He was a certified personal trainer who took his craft very seriously. If you trained with him, you knew he was the real deal (just ask the kids).

His favorite past time for many years was going to the gym with his son (Derrick) and training his baby girl (Danyelle) in basketball.

Another great time in Derrick’s life was his initiation into the Omega Psi Phi Fraternity, Inc (grad chapter) on August 21, 2003. He met several line brothers that would indeed be fraternal. Hanging with the “bruhs” brought great joy in Derrick’s life. Whether it was meeting a brother at the shooting range or engaging in a spirited conversation that sometimes went on for hours. Derrick had such a big heart and enjoyed conversing with others. It was through these engagements that he expressed care and support to so many.

There were many relationships that greatly impacted Derrick’s life. His first mentor after college and longtime friend. Dr. George Roberts, his first pharmaceutical sales manager, Sherlonda Martin and his longtime friend/doctor, Dr. Kenneth Harper. His “brother,” Herb White, introduced Derrick to weightlifting. Also of significance to Derrick were his closest friends from his hometown Columbus Ohio, Kevin Muhammed, William Berry, Spencer Harris, and college roommate, Darryl Ray. All were his brothers and will always be remembered as family.

Words cannot describe Derrick’s devotion to his parents and his deep regard for their protection and making provisions for them in their later years. His daily routine often included them as he was grateful for the wisdom they imparted and the familial and emotional support they provided to him. He truly exemplified the Biblical commandment to “Honor thy father and thy mother.” His faithfulness to his parents was evident even in what we know were his final days.